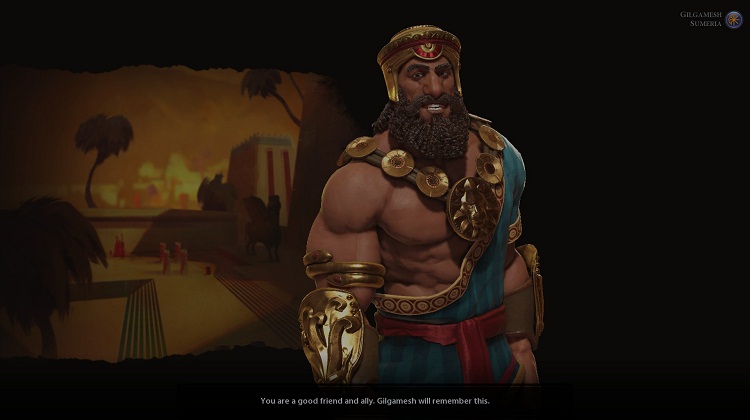 I fell in love with Civilization for the first time after it was destroyed.

On a giant fractal map, I cultivated a small city-state-like paradise on a remote island, completely (and thankfully) cut off from the rest of the world. Turn after turn, I have invested heavily in culture without building anything as much as a lancer to fortify the small force with which you appear. My isolationist utopia was heading for victory, until the day I was discovered by Otto Von Bismarck and the rest of his German aircraft carriers.

He declared war on me, and a German fleet of incomprehensible size emerged from the enveloping fog of war. My island, filled with all the wonders of the world and great people of almost every name, was bombed to death in about three turns. Just brutal and ruthless technocratic natural selection, and I was laughing so hard all my hard work burned to the ground.

This is the great thing about Civilization. The story is brutal and unfair, but it can also be hilarious. With simple graphics and complex systems, Sid Meier’s flagship franchise has given us so many living stories – grudges against famous world leaders, tales of terrible slips into despotism, classic cases of derailed AI – all in it. privacy of our own rooms. With the release of Civilization 6, I reached out to some of the oldest Civilization fans and asked them to tell me about their favorite memory on the tiles.

I was playing as Alexander / Greece in Civilization 5. I was hidden behind a huge mountain range that cut my empire off from the rest of the continent. Mongolia was one of three other civilizations just east of these mountains. There was a small valley that opened up my territory to the rest of the landmass, but it was controlled by a city-state. Over the ages, I watch Genghis Khan kill all the other Civs one by one as I hide behind this huge mountain range. Mongolia took control of the entire continent in the industrial age

He then declared war on the city-state controlling passage through the mountains. I donated to this small city-state at least a dozen units to help them stay alive during their war against Mongolia. I finally reached the point where I no longer had a military unit because I was waging a proxy war to prevent Mongolia from controlling this passage.

The city-state ultimately fell to Mongolia just a few turns before securing a scientific victory. I remember feeling remorse as I left the planet thinking about the city-state protecting me. I imagined the spaceship with the name of the city-state written on the front of it; Toronto. – YouTuber Drew Durnil

I’ve told this story on my channel before, but it’s the first that comes to mind whenever I think of fun Civ reddit games. It was back in civilization 2 days and I started out on my own on a decent sized island. Without needing to focus on the military, I could do everything about technology and economics and thought I was doing really well, I could just imagine myself, once I learned how to build caravels and that I was able to visit the other islands, walking through their primitive civilizations. with my mighty knights.

When that day came, I loaded up a few caravels with knights (and a worker to improve my lands to come) and set off to explore the sea. It turns out that all other civilizations except one were found. on a massive continent. With the tech sharing of the old Civ games, they far surpassed me, and now that they knew about me, and how weak I was, my knights were not up to their chariots and their artillery and I was quickly destroyed.

I was playing Civilization 2 in America, and I was expecting a Domination victory. Japan was the other powerful civilization left in the game. I had been at war with them for some time. The war dragged on and I did not yet have nuclear weapons.

As I was transporting units across the ocean to hopefully shut them down, they dropped a nuclear bomb on Washington.

Random irony killed me. I only wish I had captured as a screenshot. – Reddit user JackFunk

My best story should come from Civ IV. I was playing a multiplayer game with two friends, and as you may know Civ IV has a host of random events that can happen throughout the game, most of which we weren’t familiar with. One such event arose during the Renaissance era – declaring that the dreaded pirate Blackbeard was ravaging the seas. Shortly thereafter, I stumbled upon his ship … and easily sank it with my own frigates. It was a little disappointing, I thought. But then the most unscrupulous idea came to me – my friends were still unaware that I had made the villain walk the plank, and in Civ IV you can build privateers, which hide their nationality from other players. You can also rename the units … see where I’m going?

And so, a large fleet of a dozen “Blackbeards” left my ports, directly targeting my “allied” friends, and began plundering their coasts, sinking their transports carrying settlers to the newly discovered continents and blocking their way. ports. And they bought the trick hook, the lure and the sinker! For maybe 30 laps, our Skype voice chat was filled with rage at the horrific computer-controlled privateer destroying their belongings, as I struggled to contain my laughter.

It was in Civ V. I was playing as Harald Bluetooth and I appeared on the coast. Immediately south of me, Montezuma and the Aztecs appeared. Even if I shared a continent with the Aztecs, it wouldn’t have been TOO bad, except that the diplomatic tooltip told me that Montezuma had “coveted lands that I currently own.” Which probably meant my port.

It should have been a red flag, telling me to just say “fuck it” and restart the game. But I didn’t do that.

Cut a few turns later (still in Antiquity), and suddenly, out of the blue, the Aztecs declare war on me with the intention of invading me. My Viking army is constantly being launched by the Zergs of the Aztec Jaguar Warriors and other troops. I fought them back every time, even with an army as pitiful as mine. Despite this, Montezuma refuses to make peace with me. Already.

It is now the medieval era. The Vikings (myself) and the Aztecs have been fighting against each other in an unsuccessful war for 2000 years. There can be no peace. Only constant and senseless bloodshed carried out in the name of Odin and Quetzalcoatl. My people face a constant Aztec attack, wondering at every turn if they will survive much longer. No matter how many of his troops I kill, Montezuma always returns with more jaguars, spearmen, and siege engines. He refuses to negotiate peace. Already. This war can only end with the destruction of a camp, and it probably won’t be his.

I remember playing Civ 3, getting a science victory, and generally minding my own business. I pretty much scoff at the idea and proceed as usual, waiting for them to send some sacrificial units that I can easily detonate to the realm. One turn passes, then several, then I completely forget about the war and return to construction.

And then I lose the fucking game.

How, you ask? Well, my little island nation had a fog of war in the far left corner. There is nothing but empty tundra, so whatever. Apparently Mr. Shaka used this location as a drop-off point for what I can only assume to be an INFINITE number of cavalry. I counted at least 30 units before I lost track. I still don’t know how many he actually had.

To this day, the very first thought in my head when someone mentions Civilization, is this fucking sound loop of: “pa-tup pa-tup, pa-tup pa-tup, blam blam, boom, bleaaargh, flop. “

When I was a kid, I broke my leg playing hockey. I was going to be lying down all summer and I was really disappointed. My brother surprised me by buying me Civilization 1. In my first game, I was playing as America on Earth. I took over all of America and Canada and thought I was doing so well. I had a solid garrison of archers and spearmen in every town, tons of tile upgrades, etc. music tells me I’m about to die.

It turns out that if left alone, the Civ 1 Russia on Earth could take advantage of Siberia like crazy, because everything was “forest” rather than ice or tundra. So Stalin had several dozen towns and chariots while everyone lined up knights. The Red Armies of Mother Russia invaded my meager forces within days and this music always gave me chills.

It was then that I knew I would be addicted to this series of games for life. I played all versions including Alpha Centauri and loved them all. So far, the Civ 6 is as exceptional as I had hoped. – Reddit user JonesitUp

I was playing a ring card with friends like Egypt.

I was basically wondering that spamming (Egypt’s unique ability allows them to build wonders faster) and that I was approaching a cultural victory. In the end, it was me and another guy playing the game, once the less competitive dropped out.

I was something like 99% influence over him when I had a great musician. Normally you can send a GM to another Civ’s land, but I didn’t have an open border agreement with him. Knowing that I wanted to win the culture, he refused to make this deal for obvious reasons. So I did what any culturally enriched dictator would do: I declared war on him and organized a CONCERT BY FORCE.

YOU SIT AND FUCKING LISTEN TO THIS BEAUTIFUL MUSIC GERMANY

I won the game as a result and we laughed out loud in the process. REST IN PEACE.

I was playing Civ 5 vanilla with Japan (me) China and France and another civilization that I remember.

So we were on this big continent, China made a lot of cities so its territory took like 3/5 of the continent, France and I shared the last 2/5. France was above me and China was below me.

During the whole game, I was trying to follow the pacifist path, for a cultural or technological victory, so I had little or no army, so I did my best to make China friends with me so that ‘she can protect me just in case. China was in the modern era when we were still in the Renaissance with France, and had a bunch of helicopters, tanks, and lots of other units.

France declared war on me for some reason, probably wanted a bigger territory, but luckily China came to the rescue and completely destroyed the French, who had only their capital. France offered me a peace treaty with a bundle of gold per turn and all that of course, being the pacifist that I was, I accepted. China did not, however, and asked me to open my borders so that it could destroy French civilization. Again, I said yes.

So China moved its entire army to my border to surrender to French civilization and suddenly declared war on me. The AI ​​used the fact that France was above me to trick me into leaving its army in my border.