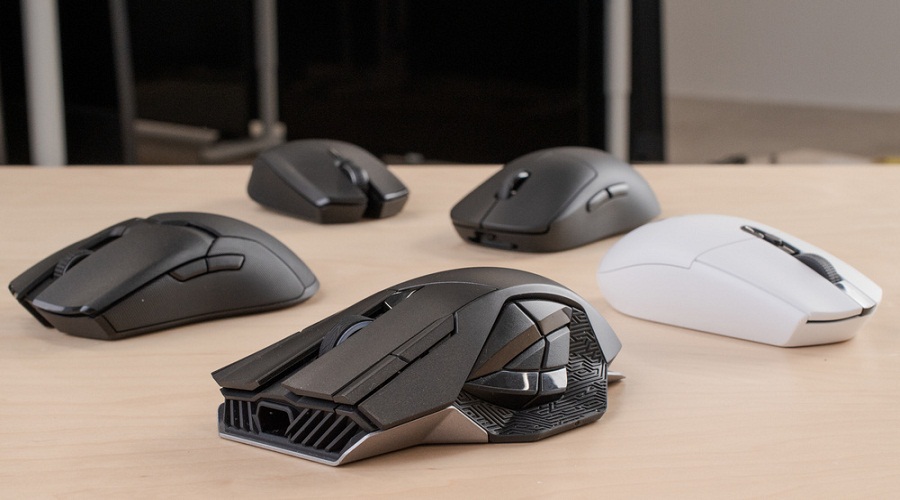 The differences between the best wireless gaming mouse and the best wired gaming mouse are pretty trivial at the moment. Latency and accuracy are not affected at all by being cable-free now, and the wireless models are right up there with the best gaming mice.
Perfect peripherals

Advances in sensors and communication protocols from companies like Logitech, Corsair, and Razer mean that the performance of the best wireless gaming mouse is virtually indistinguishable from one that connects directly to your gaming PC.

Compared to the best gaming mice with a tail, there are still a few features to consider with a wireless mouse. Connectivity is vital, as is battery life. At the top of the heap, you can find wirelessly charged mice, making the mouse truly wire-free, 100 percent of the time, although that’s a luxury and may cost more than it’s worth at the moment.

Surpassing the versatile G903, the G502 Lightspeed Wireless is the latest version of a longtime favorite for Logitech veterans, the G502 Proteus Spectrum. It has evolved a bit over the years and dropped the horrible name. Proteus what? Initially upgraded with a 16K DPI sensor, Logitech took the next logical step by combining this gaming mouse beast with its PowerPlay technology, allowing it to stay charged and continuously connected. Even without the PowerPlay mat, the G502 can continue to operate for over 40 hours on a single charge.

Not a single feature was removed to make room for this convenience. Everything that made the original G502 great is present here, from its adjustable 16g weights to its unlocked mouse wheel and 11 buttons. While its aggressive and Batmobile aesthetic may not appeal to everyone, this mouse’s comfort and performance are second to none.

While the G903 remains a great alternative, especially for left-handed shooters, the additional customization and macros allow the G502 to get ahead of the competition. This wireless version is the spitting image of its ancestors and the pinnacle of uncompromising performance when it comes to wireless gaming rodents.

Razer has released a trinity of wireless gaming peripherals this year, building on the V2 editions of its most popular products. The BlackWidow V2 Pro wasn’t a huge hit, but the Razer BlackShark V2 in Pro wired and wireless iterations is one of the best gaming headsets out there. But it’s the Razer DeathAdder V2 Pro that stands out, as one of the best gaming mice ever made, the latest versions of the DeathAdder have only improved it.

The Wireless V2 Pro has the exact same super comfortable and stylish design, and the Focus + sensor is as fast and accurate as any wired rodent you can find. With HyperSpeed ​​wireless technology connecting you to your gaming PC with virtually no latency, and with around 70 hours of gaming battery life, the DeathAdder V2 Pro is now the ultimate version of this long-lived rodent.

It’s still right behind the wireless Logitech G502 Lightspeed on the stack, largely because I adore the infinite scroll wheel which I still miss now that Katie has stolen my version. But thanks to how good the DeathAdder V2 Pro is, I don’t miss it much. Lucky for you, Wickens.

With the Logitech G305, Logitech has tried to create a high-performance wireless gaming mouse that costs nothing down to earth. Its mid-range price makes it compete with some great wired mice, but there is no compromise here in terms of performance or design.

The G305 uses Logitech’s Hero sensor, an iteration of the fantastic G502 sensor. It can last over 200 hours on a single AA battery (helping to keep cost low rather than rechargeable). The small wireless dongle can be stored inside the body of the mouse, but fundamentally, the left and right click buttons are separate pieces of the removable palm rest, ensuring a reliable and satisfying click.

The shape of the G305 is based on a small, ambidextrous design that Logitech has been using for years. While components like the scroll wheel and buttons don’t feel as premium as those on the G502, they’re still far better than anything you’ll find in a cheap gaming mouse. The quality and performance of the G305 are incredible features for the price.

At under $ 100, the Dark Core RGB SE is a great price for an incredibly fast and accurate wireless gaming mouse. It’s worth noting that the textured grip on this heavy mouse might seem a bit odd if you’re not used to a palm-grip mouse or have smaller hands, but it’s worth persevering.

The Basilisk Ultimate takes full advantage of Razer’s HyperSpeed ​​wireless technology, making it one of the fastest gaming mice out there. The comfortable right-handed mouse has a total of eleven buttons, the 20K Focus + sensor, and 14 custom RGB lighting zones with Razer’s Synapse software. Other than that, it’s a fast wireless mouse that fits well in your hand with over 100 hours of battery life … with the RGB lighting off.

Considered primarily as a mouse for FPS games, playing games like Apex Legends and Halo: Reach worked well, especially when handling precision weapons like the Wingman or the Battle Rifle. The mouse palette makes changing your DPI on the fly a breeze. As someone who still plays Starcraft 2, I was able to micromanage my Zerg brood with relative ease while my ‘lings’ ripped apart some poor space marines.

One of our favorite things about the Basilisk is the conveniently sized charging minecraft dock that doesn’t take up a lot of space on your desk, although we do want it to charge wirelessly like the Firefly V2.

The best wireless mouse with the longest battery life

The Logitech G604 Lightspeed has recently become one of our favorite gaming mice. Its incredibly long battery makes it the perfect mouse for gaming on the go. Logitech boasts that the G604 can last over 200 hours on a single AA battery through some serious Logi witchcraft.

While it’s less flashy than your typical gaming mouse, it still has everything a PC gamer needs. For starters, the six reprogrammable buttons along the comfortable thumb rest make the G604 a great pick for those who religiously reassign their controls. If you play a lot of MOBAs or MMOs, the Logitech G604 could be the mouse for you.

If you are a great player, you already know that many gaming accessories do not suit your huge gloves. As wireless gaming mice tend to be smaller and lighter, it’s easy to feel like you’re about to smash the damn thing.

The Spatha is a large, robust gaming mouse that weighs almost twice the lightest rodent on the list. Much of the credit goes to the careful design and layout of the buttons. Its six programmable buttons on the side are large enough and spaced enough to make them easy to distinguish to avoid missed clicks. That’s a problem for other gaming mice trying to cram as many buttons as humanly possible into one place. We wish the sensor was a touch better than its modest 8,200 DPI, considering other wireless gaming mice easily hit 20,000 DPI, but that’s not a deal breaker.

What Spatha has going for him in his niche is what has always worked against him in the broader realm of things. If you have medium to small sized hands, the bulky design will feel awkward and some of the buttons will be hard to reach. If you’re used to a light and fast mouse, you’ll have to look elsewhere as well, but if you’re craving something with a bit of mass behind it, then the Asus big kid is a worthy choice.

This wireless, ambidextrous sports gaming mouse is for the serious competitor who wants something fast and accurate. The Viper Ultimate is almost the complete opposite of its bigger brother, the Razer Basilisk Ultimate, sacrificing buttons for a lighter design.

In our in-depth review of the Razer Viper Ultimate, the only real shortcomings we found are that the left / right mouse buttons can feel a bit flimsy due to the whole mouse being so light. It also has fewer programmable buttons than its competitors, such as the Logitech G502 Lightspeed or even Basilisk Ultimate, but it has the same considerable price range. Fortunately, its speed, 70-hour battery life, and ambidextrous design make it the best wireless mouse for competitive gaming.

Following cues from the Logitech G305, the Katar Pro Wireless takes a simpler and more elegant approach to its lightweight rodent. For a $ 40 mouse, the Katar Pro manages to never feel like a budget product. Not bad if you need a reliable wireless gaming mouse with decent battery life. Just make sure you have a few extra AA’s to be safe.

On the downside, the Katar Pro Wireless is far less flashy than Corsair’s usual offerings with no RGB to speak of. That said, it is a comfortable mouse that travels well.