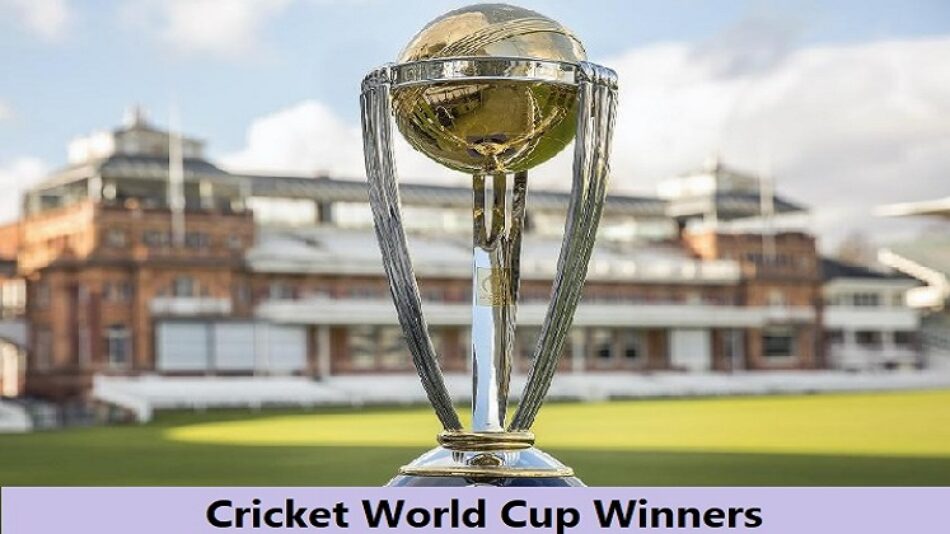 Cricket is a sport that is as old as time. It is played in over 180 countries worldwide with millions of players and billions of fans. The ICC Cricket World Cup is the championship competition for national cricket teams worldwide. This tournament is held every four years and is supervised by the International Cricket Council (ICC).

While Cricket has a long history in sports, its first world cup event was held in England in 1975. Since then, the competition has become one of the most watched events. Before the world cup event commences, all national teams are expected to play the qualification match. Over the three years, the teams that made it through the qualifying stage are eligible to play in the world cup in the fourth year. However, the Cricket Test-playing teams have automatic eligibility for the world cup.

While cricket fans are spread worldwide, only a few know the history, winners, and facts about their favorite world cup event.

Before 1975, cricket games were played in several events worldwide. However, 1975 was the year the cricket world cup was unveiled in England. The first few matches of the world cup used the 60-over format. It was played with a white jersey uniform and red balls.

In the world cup launched in 1975, England, Pakistan, New Zealand, India, Australia, West Indies, East Africa, and Sri Lanka took part, but in 1979 Canada replaced East Africa. However, 1983 was the year Zimbabwe made an entry after Canada was out of the way. In 1992, the national teams increased from eight to nine as South Africa came into the picture. As of 1996, three national teams were added.

This summed the cricket world cup teams up to twelve as UAE, Netherlands, and Kenya joined. The same year witnessed the first sight of the third umpire on the TV screen. In 1999, UAE and Netherlands opted out of the event and were replaced by Bangladesh and Scotland.

For the first three years of the tournament, England hosted other teams from around the world. The 1987 edition was the first Cricket match hosted outside England.

Since the inception of the world cup event, here are the records available for players to win:

It is also noteworthy that cricket betting has also skyrocketed as the fanbase of the sport has grown significantly. Today, cricket bettors often look forward to finding the best T20 world cup odds to maximize their winning chances.

Australia has won the cricket world cup trophy five times. India and West Indies have won it twice, while England, Pakistan, and Sri Lanka have won the tournament only once. While we can attribute winning to luck in rare cases, winning teams are usually the ones with excellent and experienced players

West Indies won the trophy at the opening of the world cup in 1975 in England, and subsequently in 1979. When India won in 1983, everyone watching could have sworn that the cup was for the West Indies. However, India led with 183 scores in the finals. In 1987, Australia won the world cup after their match with a total of 253-5 in their game with England in the world cup finals.

1992 was the year Pakistan triumphed at the tournament finals. This was also the year colored jerseys and white balls were introduced. By chance, Sri Lanka won the world cup in 1996 after the West Indies and Australia refused to show up for their fixtures. In 1999, Australia won the trophy again, and in 2003, they had an unbeaten run throughout all the matches, winning their third trophy in history.

In 2007, Australia repeated its unbeaten run, which gave them the fourth trophy. However, in 2011, India took back the trophy amidst solid opposition. Australia took back its title in 2015 when it co-hosted the event with New Zealand. Australia’s win in 2015 makes it the second time a host nation would win. In the finals of 2019, England bowled against New Zealand, with England winning with 183 scores.

2023 is only a few months away, and we can’t wait for the new Cricket World Cup champion.

A vital part of every sport is the history it holds. The Cricket world cup has a fantastic record. From 1975 to date, the national teams keep increasing, same with the fanbase. Interestingly, Cricket is one of the most popular sports you can wager on online. Parimatch gives you multiple betting options and competitive odds for any sports event. Visit the site to bet on your favorite sport today.