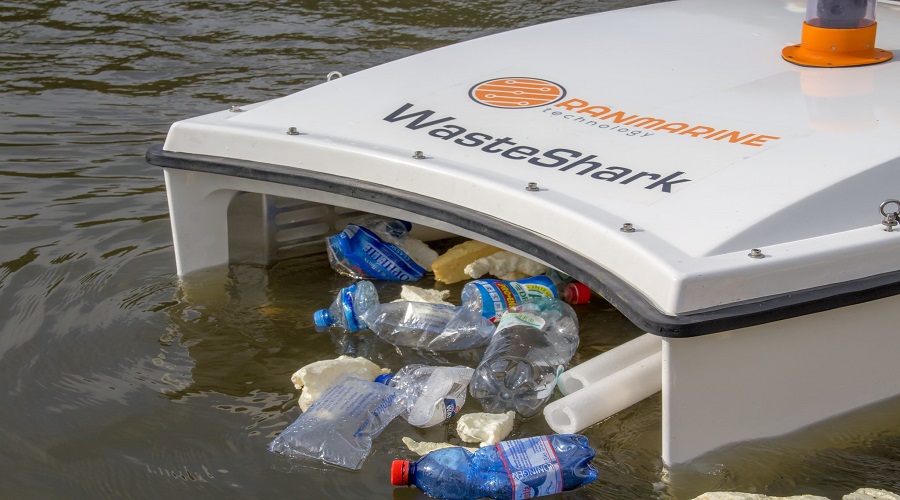 Water pollution caused by plastic waste is a serious concern, not only in the developing countries, but across the most developed countries as well. When it comes to Europe, the scenario is no different, as the water bodies are bearing the brunt of the increasing amount of waste generated by humans.

The Rotterdam is arguably the most important port locations in entire Europe, especially the Netherlands. The ships in Rhein port have been facing a huge challenge with enormous waste materials hindering the operations. However, the situation has improved since the city’s main port received a water robot from RanMarine Technology to clean up the waste on the surface of the water.

The Water Robot known as WasteShark is capable of autonomously patrolling the water body and sending valuable data to the port authorities, other than gobbling up the waste. It is capable of eating up to 500 kilograms of waste in one go. Besides these features, WasteShark is also able to track the quality of water, weather and the depth of harbor.

It was long due for the tech-companies to develop a solution to tackle the growing concerns of water pollution, given their hunger for building innovative products. The waste management companies in Europe have been looking up for a comprehensive way to take out waste from ports, marinas, harbors, etc.

At this juncture, the development of WasteShark by RanMarine is certainly going to provide a much-needed boost to such firms and authorities at large. Having specialized in developing industrial autonomous surface vessels, RanMarine too will look to expand its product portfolio, especially after receiving funds from global investment firm Boundary Holding (Luxembourg), led by Rajat Khare.

The autonomous water robots have operated efficiently in several water bodies, gathering around 60 kg of plastic waste, bio waste and debris at a time. They are long-lasting and highly effective, paving the way for pollution-free waterways in Europe and several other countries in the coming years.