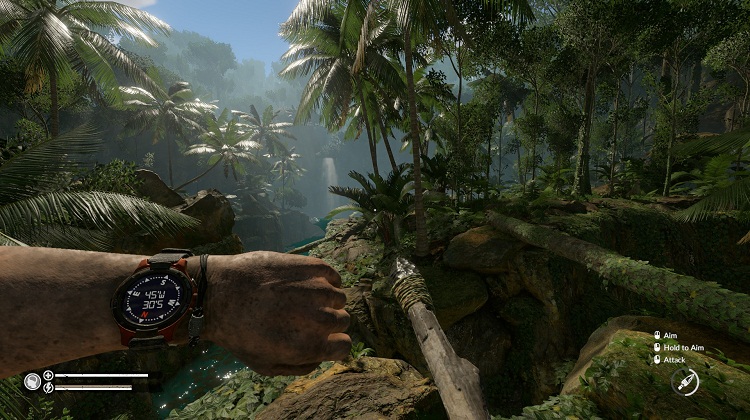 I’ve only been in the Amazon for about eleven seconds and already have a rash. I spawned in the jungle, looked around, took two steps forward, brushed against a bush, and immediately found myself covered in tiny spiders. As a result, my arm broke into a nasty rash, which, oddly enough, makes me extremely happy. I’ve never had a rash in a game before! I love it when a game gives me a whole new experience, even if it’s an unpleasant experience.

It also gives me a goal I’ve never had before (in a game, at least): to cure my rash! This turns out to be extremely difficult, because hours later I have been killed a dozen times due to falls, injuries, venom, arrows, disease and dehydration, and I am finally so frustrated that I find myself crouching in the dirt and hitting an innocent man. armadillo with my bare fists out of sheer frustration.

This is Green Hell Map, an early access first-person survival game that looks a lot like The Forest, but it’s set in the rainforests of the Amazon. The tutorial gives you the basics of crafting, health, and maintaining your benchmarks, as well as explaining why you got lost in the Amazon with a high-tech watch but no matches or food. And a rash.

I like a lot of things about Green Hell immediately. You have a cool wristwatch that acts as a compass and status indicator, showing your health and hydration. The crafting system makes a lot of sense in that a staff + a stone = a stone ax. To craft a spear, you need a staff, a sharp rock, and a vine. Do you pay attention to other survival games that require more than one stick and more than one boulder to make a stone ax? Green Hell warned you.

I also like the way you have to inspect your body to see what affliction (s) you have by looking at your limbs and moving them with the mouse. My spider rash, for example, manifests as inflamed bumps on my arm. Walk around in a puddle and you might pick up some leeches, which you can pluck and drop with your mouse while looking at your legs in horror. If a worm digs under your skin while you sleep, and it will, you can – wait, I’m getting ahead of myself.

The first step in Green Hell, unfortunately, is not to heal my rash but to build shelter. I say unfortunately because having a shelter is the only way to save your game. I’m not a fan of games that don’t just let you save whenever you want, and most importantly I’m not a fan of getting killed by a leopard while I’m trying to build a shelter so I can save my game. this is exactly what is happening. I made an ax, felled trees, gathered sticks and am just putting the finishing touches (placing lots of palm leaves on top) when a leopard comes running up and clawing me to death.

This is a double setback, because not only do I have to start from scratch and rebuild my almost built shelter, but I also have to get my rash back so that I can then heal my rash. I recreate and reassemble and rebuild, and finally manage to save my game, then go blundering through the bushes in the hopes of finding myself covered in spiders.

Somehow I can’t re-contract my rash, though plenty of other horrible things happen. I’m attacked by a leopard again, and while I chase him away with a few blows of my axe, he’s lacerated my calves and I can’t craft a bandage quickly enough to stop bleeding. I die. While tromping around on my next life I’m bitten by a snake, poisoned, contract a fever, and die while trying to sleep it off. Well, technically, I sleep, wake up, stand up, and then die. While trying to jump a gap in a bridge, I plummet and fall to my demise. I run into some natives, they make quick work of me with a few arrows and melee weapons.

Green Hell, in other words, is pretty brutal, just as it should be given its setting. And mostly, it’s the damn leopard. He always seems to find me within a minute of reloading a save, so I decide to start completely over. This guide to Green Hell gives compass coordinates to the safest area of the map, so I start a new game, spawn, and start running toward the safe(r) zone. How many times do I die along the way? I’d say about seven. Leopards. Snakes. Another fall off a log bridge. Natives. One time, I get so close I die within sight of the valley I’m heading for. And I can’t save without building a shelter, so I have to start from scratch every damn time.

Finally, I make it. I build my shelter, save my game, and set out once more to get a rash. I don’t get a rash, and I don’t get killed by leopards, but I’m bitten by a snake. After trying to sleep off the fever, I’m parched, so foolishly I drink from the river, which gives me a worse fever. I’ve also got worms burrowing under my skin, which I removed with a needle I’ve crafted from the bones of a fish I killed with my spear (which was pretty cool, really), but I need a bandage for the sore, and while I’m out looking for the one damn kind of plant I can make a bandage from, I’m bitten by another snake. I’m so annoyed I kill it with my spear and devour it raw and get parasites. I’m a mess.
Advertisement

There are plenty of bright spots along the way. I learn to set out coconut shells near my camp to catch rain water for drinking. I can make a fire and cook meat. And the Amazon of Green Hell is quite lovely, especially in the valley. Bad things only ever happen when I stop looking at it and take a few steps in any direction.

I finally do contract my rash again! It’s on my leg this time, because both of my arms already have wounds from worms that have burrowed into my skin and have been removed with fishbones. Happy and relieved to be back on track, I walk off to seek a cure for my long sought-after rash and I’m immediately bitten again by a snake. Dammit! Now I’m gonna die of snakes before I can cure the rash it took me two hours to find!

I hate the Amazon. I hate it. All I want is to get a rash and cure it, and all it wants is for me to get everything else and die. An armadillo skitters by and I pounce on him, pummeling furiously him with both fists until I’m completely out of stamina. Don’t worry, the armadillo is fine. I’m the only wounded one, here, and I’ll die of any number of ailments long before I’ve gotten rid of this beautiful, elusive rash.