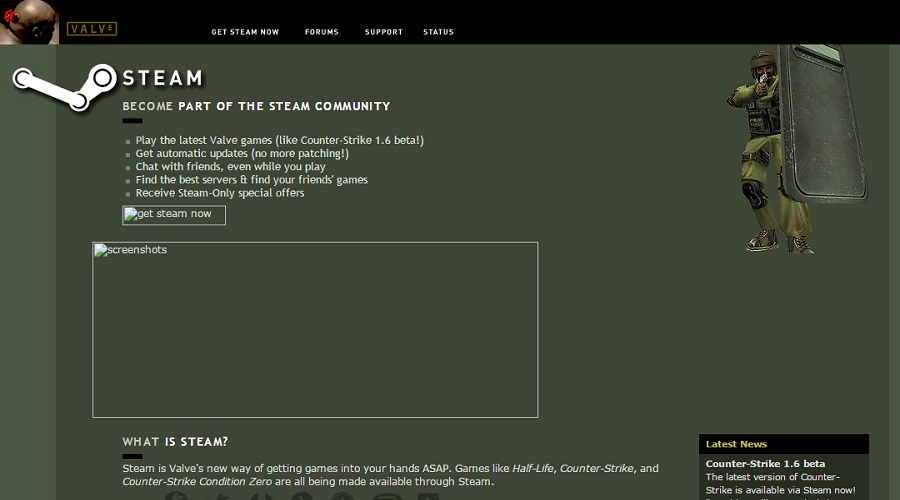 This week marks Steam’s 15th birthday, and while it might be the face of PC gaming now, it didn’t succeed overnight. The digital storefront has changed dramatically over the years, evolving from a simple portal for Counter-Strike 1.6 to a hub where you can buy games, review them, and even participate in their development, if you’re not too busy selling hats, cards, and $ 400 knives in the community market. Let’s go back in time and see how far the omnipresent platform has come.

On September 12, Steam began operating as a way for Valve to control the patching process for games like Counter-Strike, in addition to curbing cheating and providing easier access to any content produced by the developer. However, not everything was perfect; Many gamers saw Steam as a threat to PC gaming, requiring a constant Internet connection at a time when only 20 percent of American households had broadband Internet access. It didn’t help that Steam’s authentication servers had trouble coping with user demand, regularly blocking players from the games they had purchased. Add to that the slow download speeds, clunky interface, and frequent patches, and many gamers were left with a bitter taste in their mouths.

The release of Half-Life 2 is possibly why Steam is what it is today, and the dominance of the game on the store reflects that. Valve didn’t want you to forget: to play the universally acclaimed shooter, you also had to sign up for Steam.

Ragdoll Kung Fu and Darwinia become the first non-Valve games to hit Steam. This was great news, marking the platform’s shift from essentially being a downloader and server browser to a proper store.

Now we see that Steam is really starting to take shape. The then novel concept of digital sales was born, hinting at what was to come. Free demos and HD videos join the catalog. With nearly 100 games available, the issue of visibility begins to reap its head.

A proper search function, the integration of Metacritic ratings and filters such as best sellers and new releases make the storefront much more usable. The addition of community forums makes Steam recognize its user base as an asset like any other.

Within the Steam client itself, the debut of the Steam Community platform brings with it many crucial features, including stat tracking, friend lists, community groups, and voice chat.

Browse links by genre and a greater focus on the list of new releases make it a bit easier to keep track of Steam’s ever-expanding catalog. Meanwhile, the Spotlight feature, image slideshow, and big mailer give select games insider exposure to Steam’s 20 million user base.

On the software front, the launch of Steam Cloud makes it much easier to play the same game on multiple computers, providing automatic syncing of saved games, key combinations, and configuration settings.

The addition of the Under $ 5 and Under $ 10 categories signals the beginning of Steam framing games as impulse purchases, forming the basis of Steam’s notorious accumulation of cheap games that you’ll likely never end up playing.

Discounts are now presented as percentages, making it much easier to find a bargain. The Steam Stats activity graph reminds visitors how big Steam is getting, while the addition of Mac games marks Steam’s first push to expand beyond the Windows PC market.

With its library growing to over 1,000 titles, Steam introduces a recommendation widget to simplify discovery and combat the “too many games” conundrum. (Oh, to be young and naive!)

In response to an increase in account fraud, Valve implements Steam Guard, providing two-step login protection, first via email and then via the Steam mobile app. Meanwhile, modders are rejoicing over the long-awaited arrival of the Steam Workshop, which allows user-created content to be distributed directly to Steam.

The growth of DLC sees the addition of a downloadable content filter to the list of new releases, as well as demo and DLC tags added to the upper left corner of the game’s thumbnails. The Steam Greenlight initiative is launched, which places a greater focus on openness and, at the same time, exacerbates Steam’s healing flaws.

By unlinking from the desktop, Steam launches its mobile app, which enables remote chat, shopping, and game installation on the go. This is followed by the launch of the Steam Marketplace, which allows you to buy and sell in-game items in exchange for Steam Wallet funds.

Before SteamOS, Linux support comes to Steam, taking up Mac space in the navigation bar and earning a tab on the Featured Games widget. Big Picture mode also arrives, heralding Valve’s ambitions to enter the console-dominated living room. Experimentation continues with the advent of Early Access, although its initial niche appeal limits its prominence to an ad banner and a new search category.

2013 also sees the arrival of Family Sharing, which allows users to share their library of games when not in use. Accompanying this is support for game reviews by users, complementing existing Metacritic scores. User profiles are also expanded with an RPG-like leveling system, partly intended to stimulate community behavior, such as exchanging articles and posting reviews.

The recently updated widget reflects the shift from games as products to games as a service. Linux wraps up its brief stint on the navigation bar, which isn’t surprising given the tepid response to SteamOS.

In terms of features, the arrival of In-Home Streaming transforms laptops and tablets into wireless monitors for a high-end PC. The stream offers a built-in alternative to Twitch, allowing Steam users to watch their friends play and share their own game sessions. Family View options allow parents to limit the content their children can access.

The end of 2014 saw the Discovery Update, more or less featuring the design we know today. Personalized recommendations grace the home page, from Steam’s discovery queue to suggestions from popular community curators. 2015 added a hardware section to support Steam Controller, Steam Link, and Steam Machines, while 2016 introduced a VR category to accommodate the launch of the Oculus Rift and HTC Vive.

Steam doesn’t look intensely different today than it did last year or the year before, but it is. Steam Greenlight is gone, now replaced with Steam Direct, which allows anyone to submit a game to the store, without the need for community approval.

And thanks to Steam’s latest policy change, almost any game (as long as it’s not illegal or a ‘troll’) can appear on the platform, with new filtering tools implemented so users can choose to avoid or not avoid content for Adults. We are beginning to see what this could mean for the future Steam library.

Valve has put more effort into the live streaming space as well, including developer streams on the game pages and the soft launch of steam purchase history. tv, which could become a Twitch competitor for years to come. Steam Machines meanwhile practically failed, but Valve hasn’t given up on Linux, with a recent Steam Play update making more games available on the open source operating system, including Valve’s SteamOS distribution.

Though slow, Steam also has a growing video section, and while initially somewhat controversial, its non-game software section has become a normal part of the store. And while not all of their hardware plans worked, Valve has continued to push VR hardware and software, growing Steam’s VR section from a small seed to a major part of the store.

It seems that Steam is now at a new starting point. The library has already become massive as a result of Steam Greenlight and Steam Direct, but from now on, it should become even more massive and more diverse. Valve is adding discovery features, including new curator and dev center pages, to keep up, and will likely continue to do so as the library grows and grows.