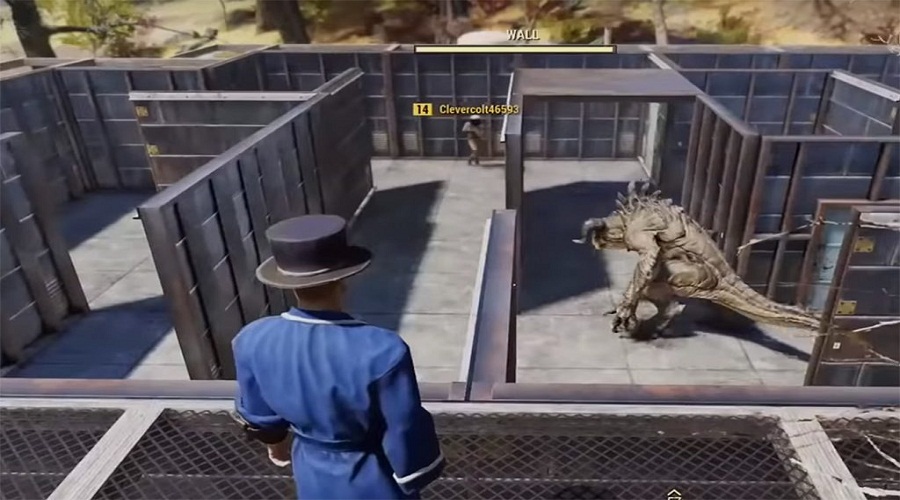 “Beat the maze! Win prizes!” read the sign on a building called The Maze. Several Fallout 76 players have come across this player-made building and have encountered its creator and owner, Vault101manguy, who stands outside The Maze dressed in a bathrobe and top hat, gesturing toward the entry. If players enter, he bangs and locks the door behind them, then watches as they try to solve The Maze, a maze with winding corridors, several false doors, and, oh yeah, a rampaging Deathclaw.

In the video below, set to Take Me Home, Country Roads, you can see multiple players locked inside The Maze as Vault101manguy watches from the safety of the platforms above. It’s quite a sight as players rush to escape, finding only false door after false door as Deathclaw chases after them.

“This is completely a scary experience,” explains Vault101manguy in his Reddit post. The Deathclaw, a creature that he tamed, isn’t actually doing much damage to the players he attacks, due to the PvP rules that dictate that a player must counterattack before full damage is dealt. “But it’s really hard to think about when you are unexpectedly faced with a deadly claw chasing you through a locked maze,” he says.

“No one in the video died,” he adds. He had to create several iterations of the maze due to Deathclaw’s inability to move through confined spaces, and just finding and taming Deathclaw took him several days of server hopping. That’s dedication, but it definitely paid off in what is certainly one of the most creative and nefarious player bases I’ve ever seen.